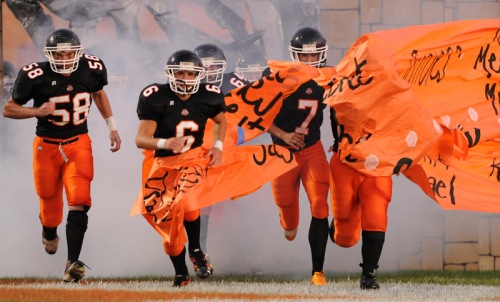 Another week of covering high school football. This time I didn’t have to cover two games so I could focus on getting feature shots a long with good action. I was assigned to cover Otsego High school homecoming game. I had to get there extra early to shoot homecoming court mug shots! That was a joy, all the girls were freaking out to make sure they looked good enough and yadi yadi yada…. So I sat around editing some images for a while and then headed over to a local ice cream shop to get s chocolate milk shake before the game started. After a good conversation with the cute girl at the ice cream shop it was time to head back to the school to find my rock star parking spot and head out to the field.

I got to the field just as the sun was starting to set so that made the sky nice and orange like one of the previous games I had. I headed over to the other side of the field so I would be shooting the sun to get a nice silhouette of a player doing something. I almost got a perfect shot but the damn pole in the background kind of kills my shot but its still creative and different

Then I fired off a few images of the people in the top row of the stadium. 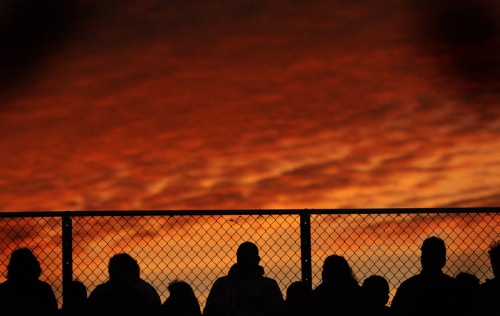 Not sure why they announced the Homecoming King and Queen was announced before the game but it made my job a lot easier! I got the perfect shot of the Queen hugging a friend after winning just as my editor had asked.

Then as kicked off approached I saw a ball boy sitting in the bench all by him self. He was really cool and let me shooting some shots of him for a while and I got something I kind of liked. I am sure the parents will order reprints and I can get some extra money!

As the sun finally set the stadium become dark quite quickly! Time to crank up the ISO, I was shooting at 1/500 f2.8 ISO High .7, not sure what that is but its damn good quality. I was quite happy with the results and it looked great on the computer screen and on print in the paper. As the game started it was quite boring as Otsego couldn’t do anything offensively so it was all Lake offense running the ball with #1 a 2 star recruit.

Then finally Lake passed the ball, this shot would have been nice if he was facing me more but owell you win some and lose some! I got my action shots for the night so it was time to get some sideline features and unique angles.